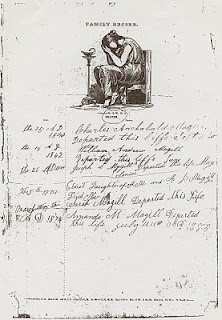 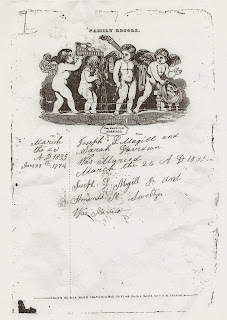 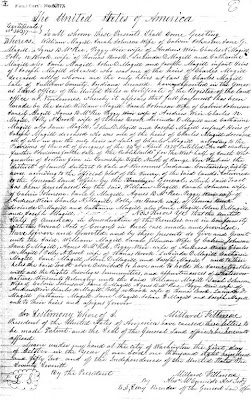 I am glad to participate in the Irish Carnival.  It is a break in my family focus, but I know it is no fun to throw a party and no one comes.  Besides, I have such a soft spot for the Irish.  My mom and dad always said "we're Irish, well, a wee bit of Irish...back in the 1800's.  Back to the purpose of the Carnival, treasures regarding my Irish family the Magills.  A family bible, I found after many dry years of searching, and wonderful land records available through the BLM GLO. 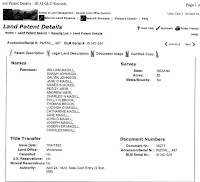 My mother's father and grandmother had died by the time my mother was 2.  Her mom, mother of 13, had her hands full with raising the six left at home, and did not share a lot of family history.  When these records were found, it was a treasure to her and her family also.
When my mother told me her grandmother's name was Magill, I was intrigued, after all, I was told we were Irish.  I easily found the book on the Magills written by Robert Magill, but could not find a tangible connection to my Magill.  A cousin of my mother, a Ralph Magill, let me know that Elizabeth Jane Magill was married to Joseph Lester Magill.  He sent me a copy of a letter he had received from a Magill saying he was related.  I studied the Dear Caleb letter.  I believe every Magill in America has read it. I was sent in all directions by it but not to Clark Co. Illinois where my ancestor died.   By process of elimination and places, and times, I had decided upon the parents for my ancestor Joseph Lester Magill who had died in the 1840's.  He was born in Tennessee.  I found  Charles Magill married Elizabeth Lester in Oct 24 1796.  This became my logical focus. Then came the search for proofs I needed to have to make it so.
I went to Ancient Irish naming patterns. Irish Naming Patterns, gives a basic pattern as listed below, although depending on circumstances these would some times vary.  So, I guess I could also say the Irish naming patterns is a treasure too.
Oldest son named after the Father's father
2nd son named after the Mother's father
3rd son named after the Father
4th son named after the Father's oldest brother
Oldest daughter named after the Mother's mother
2nd daughter named after the Father's mother
3rd daughter named after the Mother
4th daughter named after the Mother's oldest sister
Joseph Lester Magill's apparent oldest son who appeared on the 1850 census was named after him.  The Daughter Elizabeth Jane could be after either the mother of John or Sarah.  They were both Elizabeth.
The apparent second son was John Davidson Magill which was the  name of Sarah's oldest brother.  Joseph Lester was also the name of Elizabeth Lester Magill's oldest brother.    However to prove this I needed a Charles and an Archibald.  If they were born before 1850 and died I was up a creek without a paddle unless I could find family evidence.  It was about this time my mother's cousin finally broke down and sent me copies of the famliy bible.
There was Charles Andrew Magill first born, and William Archibald the second born.  I knew I had my family.  I had a probate of when Joseph died in 1844 that named a William Magill along with John Davidson as executors.  William turned out to be Joseph's older brother.  Then a "distant" cousin researching Charles Magill in Sullivan, Indiana found the land records that involved the heirs of Charles Magill.  My great grandmother was named with her brothers as heirs of Joseph Lester Magill, son of Charles Magill.  That tied us to the William Magill who came to America through Virginia.  It was all good.  I still wonder what happened that the first two sons died as toddlers, and what happened to Joseph.  Since it was 1844, it could be another Mexican War tragedy, but that will be later research.  Thanks for the opportunity,
Small-leaved Shamrock (http://www.small-leavedshamrock.blogspot.com/. ) I had fun at the Carnival.
Posted by FranE at 6:29 PM