Sentimental Sunday The Hero and The Bandit Learning Herding

This was what our Jersey cow looked like when we bought her, black face and reddish body.  We loved her. She had a crescent moon on her forehead, so we named her "Half Moon".   The Hero learned to milk when she had her first calf, and when she was young she was manageable.  When we got Bandit, a whole new dimension came  into our farm dynamic. 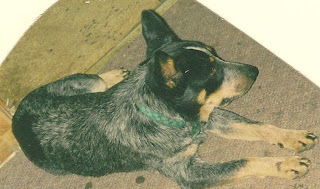 A different kind of party dog.
As Bandit grew, we discover he was a show off.  We would drive in from work, and see Bandit take off to the barn to show, "he was on the job". Finally, the Hero decided he was going to the field to see what was up.  He came back shaking his head and chortling.  He was sure given Bandit's actions he would give Spuds Mackenzie, "The Budweiser Party Dog", a run for his money as a real party dog.  Here is his report:  "Bandit would run behind the cow barking and nipping at her heels to get her to a full run, then he would grab the fluff end of her tail and swing back and forth until she slowed, then he would let go and start all over again. "  Not much fun for the cow, nor was it friend making, but Bandit thought it was a real party time. The Hero on the other hand thought it was as funny as could be.  He would airplane his arms showing how Bandit would ride and then laugh hard at Bandit's antics.  Little did he know it was the heralding of a future event.
The fun of cattle herding between the Hero and Bandit began with a new calf.
The Hero had watched the birthing early one morning and decided that he needed to move the calf to the barn.  This was because we had large colonies of fire ants on the farm, and they would attack small helpless animals and babies.  I will now revert to his account of the event
"I bent down keeping a wary eye on the cow.  She was gentle, but this was her first calf.  She looked fine with me approaching the calf, so I scooped up the calf and stood up.  About this time, in jumped Bandit between me and the cow.  I froze.  All I could get out was "NO Bandit!" as he started barking.  The cow started at a dead run for Bandit.  He was good.  He side stepped, and she ran right over me and the calf. Then came back to nuzzle the baby." 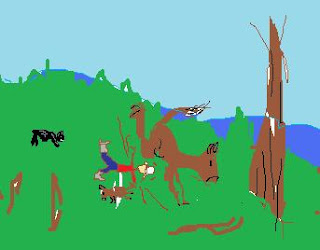 My attempt at recreation of the scene
We learned this as he deposited Bandit in a huff on the dining room floor saying "Do not let him out!"...
This was the beginning of isolation of Bandit during cow activities ...or maybe I should say attempted isolation...That is another story.
Grandchildren what lesson do you see to learn from this story?  There is one.
By the way, he did get the calf up and safe, without Bandit's help. ; )

Email ThisBlogThis!Share to TwitterShare to FacebookShare to Pinterest
Labels: Half Moon, Sentimental Sunday, The Hero and Bandit