Sentimental Sunday The Hero and Some Cowboy Background

My grandchildren, I told you we moved from inner city Houston to the country, to help your great grandfather after his heart attack.  However, I did not tell you what the farm was like back then.  As I tell the stories, I will call your granddadE the Hero, because he was my white knight, my hero.

When we moved to the country, our home and surroundings were primitive.  There weren't any paved roads.  Our driveway and the road were made of iron ore.  The structure we resided in was temporary in nature.  The walls were made of pressed board, the roof of rolled asphalt paper, the floors of pressed board also.  The Hero had grown up in a household that had the 'you hire someone to do your work' attitude.  Our move was a learning curve.  When we moved out there, I suggested that he buy cowboy boots for working in the fields, etc.  "Oh no" says he, "I like my loafers and tennis shoes."  "Okay", I said.

It was just a month later that we had a huge rain.  This is documented in weather history as follows...1979,  APR 18    16" of rain over Harris County. Flooding wide spread over many Harris County Bayous and streams.   Conroe 12-14" of rain, 3 deaths.
(http://www.hcfcd.org/hcfloodhistory.html)
http://floodsafety.com/texas/USGdemo/
That 14" rain filled Lake Conroe, which is near us, to over flowing of the dam.  Prior to that, they had predicted another 5 years to fill it to capacity.  The roads were turned to mush.  The Hero arrived home after and arduous trip from Houston in the down pour.   The roads were so soft, he parked out on the road to walk across the field to the house.  Oops.  There went his shoes in the first few steps.  He stepped down in the field and his shoes sunk.  He pulled them up out of the mud and walked to the house barefooted carrying his shoes (not a short distance).  When he arrived, he was wet, miserable and disgusted, but soon laughed at his situation with me.  The next day he went to town, and bought his first pair of cowboy boots.  He loved them.  Of course, he had to buy the hat too to protect his "hair" from the sun... 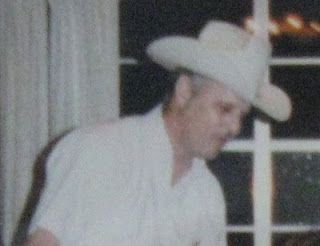 And that my grandchildren, is how your granddadE 'stepped' from being a city slicker into being a cowboy.  It just took Texas black gumbo and an act of God.  ; )
Posted by FranE at 2:21 PM

Email ThisBlogThis!Share to TwitterShare to FacebookShare to Pinterest
Labels: Sentimental Sunday, The Hero becoming a cowboy, The rain of 1979 TX