Surname Saturday....Well Sort of... It Is Related. 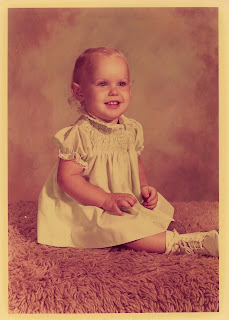 When my first daughter was born, my Hero and I were clueless as to the sex.   There were no ultra sounds, or tests back in the dark ages.
We were also clueless about our genealogy.  We knew there were some Irish strains in both back grounds, so we decided an Irish name for a child would be apt.  The name for a boy was a given.  The Hero was intent on continuing his family's tradition.  If a boy, he would be the IVth.  If a girl, now that was a different story.
I searched for names.
There was Sister (nun) who was a guest student at the Catholic college I was attending.  Her name was Aine.  The reason I knew this was, because it was the first year the Vatican allowed the Sisters to use their personal names.  I loved this Sister.  She was funny, sandy red hair, sparking blue eyes, and bright.  She always brought sun shine into a room.  This was what I wanted my daughter to be like.  Well, I got everything but the red hair and blue eyes, (forgot genes take a play there, lol).  But I digress, names, stay on track.  My favorite name was Aine.  It was a Gaelic name, it's closest English equivalent was Ann. The Hero said, " hmmm, that would be great, my family is Catholic and the Ellsworth's were Irish.  (Now grandchildren, you know how you mom or aunt, became Aine.)
My next task was to find a middle name.  Middle names are a tradition in my family and his.  Finally, I came up with Maura.  My mother was Mary, and Maura in English would be Mary.  It was a fit.  This could be the end of the story, but it wasn't.
When I finally, got around to doing genealogical research, we found out Hero's great grandmother's middle name was Maloura, how is that for getting close to a name without knowing it.  The origin of the name Maloura is unknown to us.  Martha Ann Maloura Wells grandparents were Wells, White, Hollands, and Reynolds.  I have not found a traditional teaching in any family about being Irish, nor have I found in any line this name.
If you have a clue, I could use it.
Posted by FranE at 9:03 AM