A fact that is needed to be known here is that the Hero had white hair.  His hair started 'graying' when he turned 25. 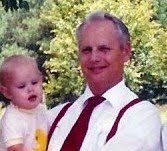 The Hero with our 6th child at about the same time as the story took place.
This event took place because our cow became adventurous.  She decided that the grass looked greener on the other side.  We had a halter on her because of her some time adventures.  One Saturday, The Hero heard the dogs barking and looked out the front door to see the cow headed for the street.  He called back Bandit, carefully closed him in the house and took off with a rope to bring the cow back.  The rest of the story will be in his words.
"I could see that the cow was headed for our neighbor's yard that has a nice garden.  As I neared, I could see her headed for the corn.  Heck, I didn't want to get shot and drug over coals for her ruining his corn so I started running and waving my arms at her to make her go on past the garden.  She went to the edge of the woods and waited for me.  I got the rope on her, when up came Bandit, who the hell let him out again? Bark, bark, bark and off she took to the woods with me in tow. Dragging me through the brambles( wild rose bushes) and briers.  I held on pulling her head down to bring her to a halt.  My glasses went flying off.  I paused for a minute.  Cow...200 dollar glasses.  The glasses won.  I let her go and went searching for the glasses.  When I found them, I had to catch her again and tow her home.  I am so scratched up and beat up that I think I am going up and soak."
That could be the end of the story, but the funny part was the next day at church.
When we got up, his back was hurting.  He had scratches everywhere.  His  eyes were even scratched.  He decided that he would go to church anyway.  So we went to church with him using a cane to walk with and wearing shades to protect his eyes which were hurting.  A long time friend came up and said,"Frances, introduce me to your elderly friend."  I looked at him to see if he was kidding; he was dead serious.  I started laughing and so did the Hero.  The Hero with his white hair, glass, bent over on a cane looked like he was 70.  I would tease him that he must have robbed the cradle because I was so much younger.  ; )
Your uncle, my grandchildren, would tell you the moral to the story is don't have cows, but then we wouldn't have the story to tell.
Posted by FranE at 2:30 AM