Sentimental Sunday The Hero and The Angel With a Gas Can

This is a view of The Hero and I as we would drive.  My daughter caught this because it was a typical view in their childhood.
We often took trips together to business functions, to see family, to be together.  I guess that was the most important function of all our trips was the time we got to spend with each other.
The events around this trip served to give the Hero a great story, actually two stories, but I will just relate one this time.

We were on our way home from a trip to Utah and were reading scriptures, in particular, Kings, Chronicles and Samuel. We had made it to the straight of way on I80 in Wyoming (a side note...Interstate 80 (I-80) is the second-longest Interstate Highway in the United States, and the gas stations are well spaced ). The Hero was driving and I was reading.  He would make a comment, ask a question, and we would discuss what was being read.  He was very auditory.  I wasn't.  That is why I would read.  We started with Samuel, then would see a foot note and jump to the foot note and back again.  That is how Chronicles and Kings worked their way in.  It was fascinating to us and back and forth I would go.  We became so engrossed in our subject that time flew.
Suddenly, the Hero made a gasp!  It startled me into this world and I said 'what's wrong?'
"Look at the map, see how far we are from a town.  Ah, we are on empty."  What! had we really been that caught up in our reading that we had failed to notice the gas gauge and had not stopped for gas?...Apparently so.  I grabbed the map and said 'Where are we?' His answer, "I asked you."  'Guessing from our last stop and the time, we should be approaching Laramie.  About 15 miles, I would say.'
At that moment, we saw a sign the said the next exit was for Laramie.  We decided to take it because it looked closer on the map to town.  (Have any of you driven the back roads of Wyoming?  Nothing for miles.)  We made it two miles, when chug, chug, choke, we came to a halt on the side of the road,  He got out and raised our hood...no, we did not have a gas can, that would have taken planning...in the hopes someone would come by to help.  I hooted and said,'you need to walk to find someone.  That looks like a house', I motioned across the way to a structure in the distance.  He was silent, just considering our situation, hot, no shade, no water, and no phone, hmmm. Time for a prayer.  Just after he finished the prayer,  a car appeared down the road.  The car pulled up beside us; a lady and three children.  She was gestured with her cigarette in her hand at the pickup and ask what was wrong.  The hero sheepishly told her what had happened.  She said, she would run to her house and get some gas for us and be right back.  I looked at the map as she drove off saying, it will be a while.  No more than 15 minutes had passed when she was back.  We put the gas in the tank, then offered to pay her.  She wouldn't accept payment for the gas, just told us where the nearest station was and took off to take the kids to a lake...Lake?
We quickly headed to town, noting that there were not any roads, or houses until we got to the edge of town 15 miles away, and it took us about 25 min. to make the trip.  We couldn't figure out where the lady or "Our Angel" had come from.  The Hero decided she an angel who was an answer to his prayer that we would receive help. 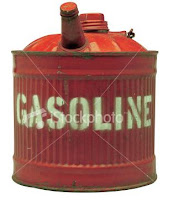 The moral, my grandchildren, is that when you are doing a thing that is right, you will receive blessings for it.  Yes, even and unlikely angel bearing a gas can.
Posted by FranE at 2:09 AM

Email ThisBlogThis!Share to TwitterShare to FacebookShare to Pinterest
Labels: Sentimenal Sunday, The Hero and The Angel With a Gas Can