Last week we learned the Hero kept secrets from his mom and it was probably a good thing.
As I said, he loved scuba diving.  Any chance he and his friends got to go scuba diving, even if it was in the Houston Ship Channel, they would go.  I will tell this in his voice.
"We got the chance to go out scuba diving on Saturday morning.  We didn't have much time, so we went to the Houston Ship Channel.  You know the water there was muddy and not very nice, but it was moving water.  When we were close to the Galveston Bay (they seemed to like that area), Mike threw down the anchor for our dinghy.  I jumped in the water ready to go as I was already in my gear.  It was pleasant swimming and I liked try to see what was around me in the water.  All of a sudden, I felt something hit my leg.  I looked but couldn't see anything.  I swam further, and felt something hit my leg again.  Now I was getting concerned, but still didn't see anything.  I continued my swim when all of a sudden, a jelly fish was attached to my goggles.!  I have to tell you, I came up out of the water, and literally walked, no, ran on water to the shore. "
Now can't you see that.  I would have been rolling in laughter had I been there.  You would have to have known the Hero back then...He was "cool"  and did "cool" things.  LOL  this had to have been hilarious to have seen. 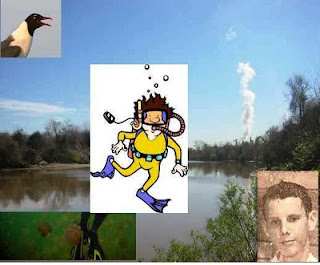