Sentimental Sunday The Hero and The Scuba Spear Gun 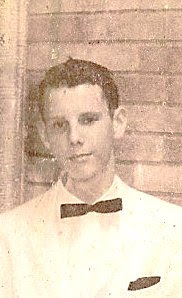 It is August and the summer is nearly over so I need to tell a summer time fun story.  The Hero loved scuba diving.  We never could afford it after we married so I know that was a disappointment to him.  He had several stories, but he never told his mother until he was in his fifties about some of his escapades.  : O...

As a exercise to keep their scuba skills up, the Hero and some of his high school buddies decided to go diving in the ship channel of Houston.   He  readily admitted that the small dinghy and the ship channel were not the safest, but they were their outlet when they wanted to try out something.  Of course it was a different era too.  It was in the mid 1960's.

They rode in their small boat out near the Galveston Bay, but still in the channel.  Pulling to the side they got out and began donning their gear.

Two were in the boat getting the spear guns ready.

The Hero went out into the water to get his goggles ready, and his brother was on the shore doing something.  We will pause here for a scuba safety warning.

The hero was bent over with his face in the water when all of a sudden something was different.  He felt for his goggles and "They were gone!"  He looked back at the boat in bewilderment only to see the wide eyed fearful faces of his friends.  They began to yell, "Are you okay?"  He said, "What happened?"  "Well, Bobby was setting his gun when it when off and the spear went clean through your goggles."  (Here, I would interject that he was probably a bit weak in the knees at this time realizing the close call, but he never admitted it.) The Hero said he thought Bobby (fictitious name) was going to faint he was so white.  All was well, no one was hurt, but they didn't feel so perky any longer.

At that point, the day was done, and they packed up and went over to the Prince's Hamburgers  to console themselves.  Of course, that was the best hamburger place in Houston at the time.

That was a story he never told his mom. (surprise.)

Email ThisBlogThis!Share to TwitterShare to FacebookShare to Pinterest
Labels: Prince's Hamburgers, Sentimenal Sunday, The Hero and the Scuba Spear Gun