Sentimental Sunday The Hero and The Floor People 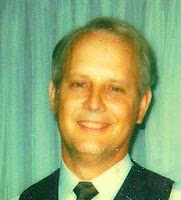 This is a PG rated post.  LOL.
The Hero was a man of unlimited imagination.  He could come up with some great story lines.  While he was sick, he had to spend a great deal of time in the restroom at work.  One day he came home very excited!  I waited and the story line came.  He had been sitting looking at the floor in the bathroom with he saw a face, then he saw another and another, and a whole story came to him around these faces. He even took pictures of the floor people to work the story around.   My daughter spent a long time with him and him telling her his plot, so I won't spell out the details of the possible storyline, but I can tell you a wee bit about it.

He, with a smile, told me the floor people were at war with the wall people.  They were real people who lived in another dimension.  The floor people worshiped the moon...they first saw it when the young son bent over to take his bath.  The hero just died laughing at that; he thought it was so funny.  Then he decided it was too risky, so he would have to come at it from another angle.
I tell you sometimes I would swear he was still 13.  ; ) Ya all have a good evening and watch it when you go to the restroom you never know.....


This is his picture of the floor people ruler.
Posted by FranE at 1:30 AM