Sharing a Slice of Life 'JOBS'

I will fall back on my father for this post.  I have pictures of him at work.  Nice to have.
As I have told you many eons ago...(exaggeration for emphasis) in a post on how my did never gave up, I admired him greatly.
In his early life he worked for the railroad(for a different post), farmed, and construction. I will, for this post, concentrate on after his leg was amputated.
He was grateful and to my knowledge never complained about going to work.  When his stump on his amputated limb would "scald", as he called it, he would go to work in pain.  I never saw him  call out sick. 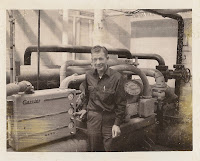 His job started out as a maintenance man over the big boiler that supplied the steam heat to the entire Central State College.  I remember going down to the boiler with sandwiches and drink with my mom for him in the evenings.


The boiler was huge.  Lots of gauges, the roar of the fire, it was awesome for a girl of 9. At least it was all with natural gas, and  not back when they had to "stoke it with wood".

When an opening came as Supervisor in the Air conditioning department, he had the knowledge from his school, and the confidence of his employers because of his work ethic.
He got the position. For nine years he worked in the A/C department of the College. He became friends with most of the professors and kept their home units working too.  He loved his job.  It was of great loss to him when he broke his hip bone of his amputated leg and had to retire as disabled.
Life is good when you love your work.
Posted by FranE at 2:15 AM