A Hero Story 'How We Met'

I got a bonus today for cleaning and organizing my genealogy boxes.  I found my calender for 1969.  I was not a journal keeper in those days ( not that I am a 100% better now), but I would jot down what happened on each day and occasionally make a comment.  On September 27, 1969(can you believe it was just 2 days and 41 years ago), I wrote:  'Met the Hero and his roommate.'
That I was my third day of a new job at Methodist Hospital Cafeteria as a check out girl working 11pm to 7am.  One of the Hero's best friends was my trainer.  At midnight, a large group of my trainer's friends came in to visit with him (and get free drinks) because it was his last night there.  The Hero was among them.  Oh, I forgot to say, my trainer was from Saudi, and all his friends with the exception of the Hero were Arab.  Turned out, in college the Hero was Vice President of the Foreign Students Association.  They were a fast talking group.  The Hero was introduced, and his friend advised me he was in the middle of a divorce.  The Hero looked so sad and very thin, but handsome because he was in his military uniform as he had just arrived from camp.  Very appealing. ; ) 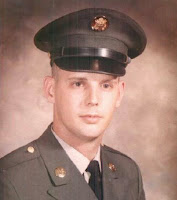 Later, we shared our thoughts with each other.
Me: "He is handsome, but Divorced! Could I go out with a man who was divorced?"
Him:  "She has pretty eyes, looks like someone I would like to get to know."
Well, grandchildren, there you have it. The exact date and place and circumstances as well as thoughts around your grandparents meeting.  A night we celebrated always.
Posted by FranE at 10:28 PM

Email ThisBlogThis!Share to TwitterShare to FacebookShare to Pinterest
Labels: A Hero Story, Calenders, How we met