Sentimental Sunday The Hero and The Waitress 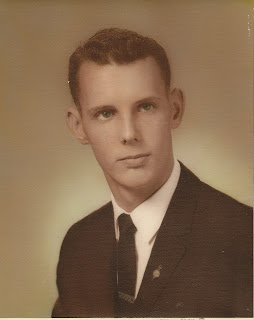 Back in 1969, the Hero was a bit arrogant.  My aunts passed judgement on him the first time they met him saying.  "A bit of a know it all wasn't he."  He had been part of a winning debate team and was in the habit of "knowing it all".

He had a favorite hamburger called a Master Burger.  We had to drive a bit to get to the restaurant.  You can tell, it was a special trip.  One evening we went and it was getting late, but when it came to his Master Burger he held high standards.  There doesn't seem to be any Master Burger restaurants in Houston any longer so I can't give you a visual.  I have a clip art hamburger that will make you want a juicy hamburger.
After we ordered, we sat and talked and talked and talked.  He became aware the food had not arrived and no waitress in sight.  He waited, then went to the entrance and inquired on what had happened with our order.  He was assured that it would be out quickly.  Well, if you call another 15 minutes quickly.  The Hero was getting annoyed.  The waitress delivered the food without an apology.  She didn't even smile. Our drinks were nearly gone because we had been waiting so long.  Did she ask if we would like more drink? NO.  It continued.  Class D service.  We finished our meal the food was good, but the Hero was hot under the collar.  He decided he would leave a penny as a tip to let the waitress know he did not approve of her service.
We paid for our meal and went to the car.  He opened the car door for me (he was a gentleman for all our married life). As I sat down, he leaned down and said "a penny is too much."  With that, he closed the door and I saw him walked back into the restaurant. The waitress had just gone to our table; he was right behind her.  As she started to clean, he reached past her and took the penny.
The look on her face as he stalked out the door was priceless.  I don't know if he said anything or not (he never told me), but the body language was enough.
Grandchildren, should he have done that?  Let me think, as I said he was arrogant in those days and felt his perception was correct all the time.  The waitress did not give good service and bad behavior should not be rewarded, on the other hand insulting someone is not the best either.  You will have to make up your own mind.  He felt that he was justified.  Maybe so.  Good night.  Love you all.
Posted by FranE at 1:45 AM

Email ThisBlogThis!Share to TwitterShare to FacebookShare to Pinterest
Labels: Sentimental Sunday, service, The Hero and The Waitress