I had two cars that were my big memories.  The first I will have to post a picture later, because I found it then lost it again.
When I turned sixteen, my dad bought me a car.  I was really bad did not respect it or take care of it.  Did a Duke's of Hazard over the rail road tracks and cracked the frame. Shame on me.
We sold it when I went away to school as I was living on campus.(that's a different story)

When I came back home my dad went down and helped me buy my own car.  A mid side Nash Rambler.  I loved it.  The seats let back all the way to let you lie back and relax if waiting.  The windows were electric.  It was a fun car, and so cute, a squarish box.   I painted Snoopy, Flowers, etc on it.  I was a regular flower child.  When the drive train went out I was so sad. 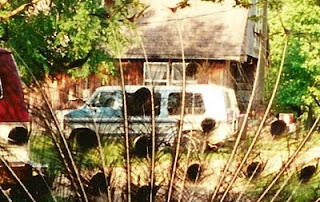 The next car that hasn't gone away, but should have is not a car.  It was a Big Blue Van.  When the Hero and I bought it, it was out of our financial reach and killed our budget.  On the other hand, it actually became a House Car, as the back seat would let down in a bed and we almost lived in it.  It was bought just before we took Texasblu to BYU in 1989.  My second son was born 2 months before we bought it.  It became like a home to him. Hence, the reason it is still sitting in our pasture like an abandoned car.  He keeps saying, "I can fix it up.  I love that Van."  I have to admit I have never had another vehicle that I love as much as the Blue Van.  It made it through 450,000 miles of fun, love, and business. When the pick up was broken, the van would take the beating. All the children and grandchildren down to the fourth grandchild were able to experience the fun.   It went from the Tetons, to Arizona, to Florida, To ALL of Texas.
I agree with the son.  I love that Van. There are millions of stories around this one.
Posted by FranE at 3:07 PM

Email ThisBlogThis!Share to TwitterShare to FacebookShare to Pinterest
Labels: Blue Van, Get into My Car, Sharing a Slice of Life