I have written about my Aunt Lillie before,  about how she is my role model of what type of person I want to be like.  I had included some aspects of her life from her second daughter’s perspective. (This is the daughter that did the DNA with me, we match so close.) The reason for choosing her for this post is that I am blessed to have been reunited with her oldest daughter , Barbara, who agreed to share her perspective.
Anyway I approach it, Lillie Lillian Langley Thole, was a remarkable woman of worth.  Proverbs 31: 10 – 31

Lillie had thick dark brown hair, laughing eyes, and had the hint of smile always at the edges of her mouth.  She was happy and had a wonderful sense of humor. We all hoped to be like her, she never held grudges or hurt others feelings.
Grandma Langley told me and Barbara, her daughter, affirmed that she had Bright's disease as a child. Bright’s disease is an archaic term. It would now be some level of acute or chronic kidney disease.   Barbara’s Aunt Thelma told her the doctors said she should never have children.  She had 5; 3 girls and 2 boys. 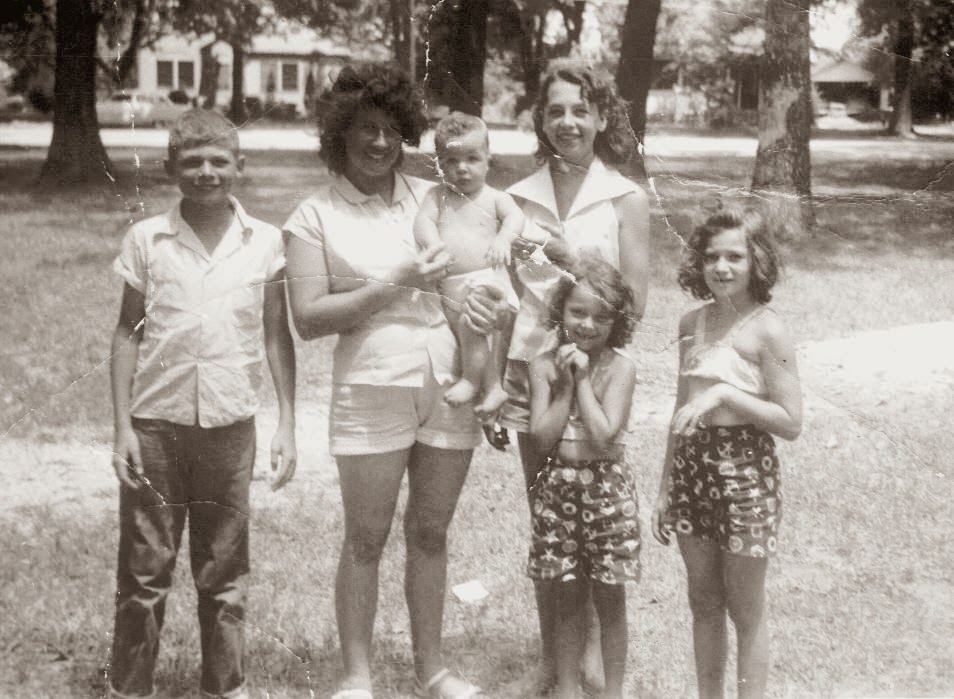 I wonder if she may have had anemia because she told Barbara, she had to eat lots of liver as a child.
Lillie and Barbara's Aunt Thelma were best friends growing up.  Thelma and Elmer saw(dated) each other before Lillie and Elmer got together. Thelma married Elmer’s brother Timothy Thole.
Barbara remembered Lillie saying her mother made her wear long skirts and high stockings to school.  Grandma wouldn't let her wear modern clothes;  that all the girls had gym shorts but she had to wear knee length bloomers.  I am fairly sure this is from Grandma Langley’s upbringing in the Church of Christ in the 1800s.
Lillie adored her dad; his death was life changing for her.  Barbara never remembered visiting grandma after that, until Grandma Langley  was taking care of her mother, our Great Grandma Gildon. Barbara adored her.
Lillie and all her family were close.  This I actually found third party evidence of in old newspapers.
The sisters had a bond that was to be envied, until...Grandma Langley upset Aunt Lynn (something none of us little ones were never told about).  Aunt Lynn stormed in and slapped Aunt Dora at a family gathering.  I have written this story here. Barbara said her mother was beside herself. She gathered her children, up and left.  They did work it out but not until they were 60.   Lillie would let her children go visit her sisters in the summertime.  They loved their nieces and nephews, who had wonderful time learning about small town and farm life.
Lillie was a great seamstress, who never used a pattern.  She would put a newspaper up to us, pencil it, cut it out and sew it up.
Everyone was always in awe of what she could design and sew.  Barbara said during that time, every woman did needle work.  Barbara went on to say, “She crocheted and embroidered and her work was all over the house, doilies, runners, pillow cases, dish towels, all the good stuff those moms did.  She was a great cook, nothing gourmet, just good old country cooking.  She played games with us, Jacks, pick-up sticks; she would use spaghetti for the pickup sticks. She played hopscotch, and would participate for a minute in about anything we were doing.

She worked as a waitress to help make ends meet.  She worked evenings, 2 pm -10 pm.  She rode the bus to work and dad brought her home.  One of them was with us almost all the time.  Mom was up, cooking breakfast, sent us to school, Dad was home by 5:30 with his lunch bucket to open and give us cookies out of it every day.  Then he was in charge of us.  He and I cooked the evening meal and Jerry and I took turns doing the dishes.  Mom wore a white uniform to work.  She was always spotless and smelled clean all the time.  I never knew her to wear perfume of any kind.  She would say "Cleanliness is next to Godliness" to all of us; hard to argue about taking a bath after hearing that.
Mom had week-ends off which left the family free to go to Fall River.  She loved to fish.  She loved the outdoors.  We had a one room cabin about the size of an over sized storage shed that had double bed bunk beds in it, that we all piled on. 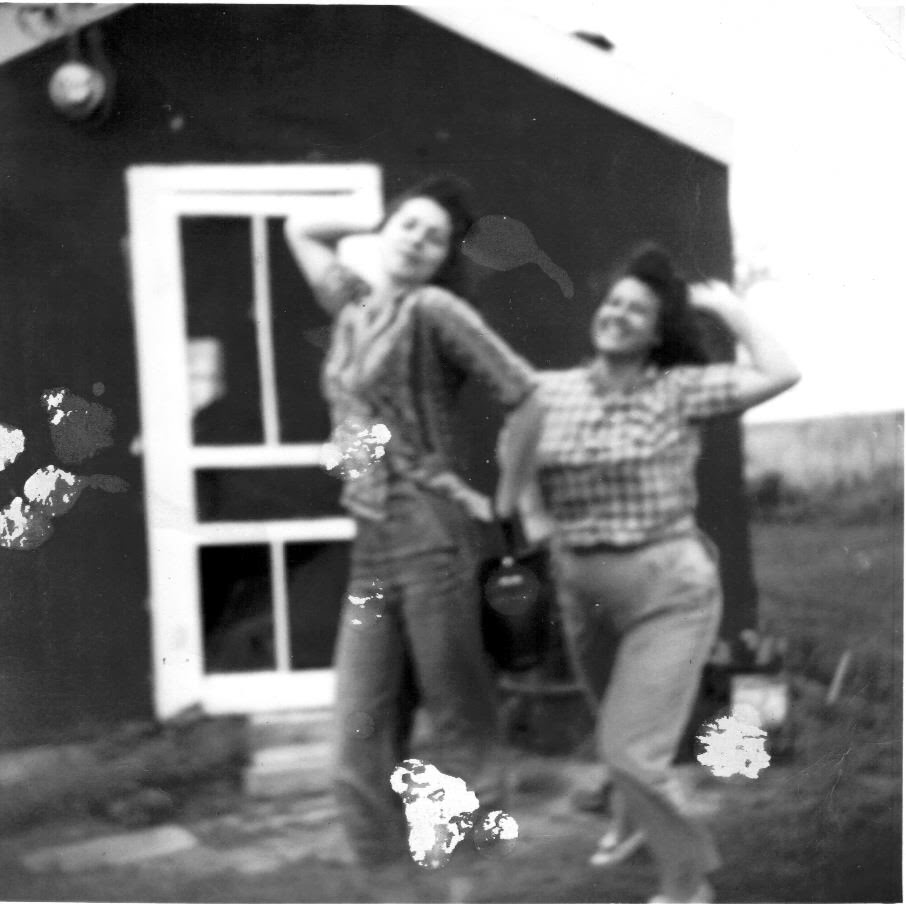 There was an apartment sized cook stove that mom cranked out her meals on and a little table and chairs.  She was always in good spirits and funny, teasing in nice ways, always positive ad uplifting.” This we have proof positive from both pictures and sibling stories.
Barbara could never remember her mother hanging her head about anything.  “Dad was good to her.  He adored her. They were always hugging and kissing.
For the most part they agreed on how to raise kids.  Once in awhile, they would differ but nothing they couldn't work out.  If they ever argued, they never did it in front of us, nor did I ever hear them raise their voices against each other.  Anger was just not a part of our life.  If we did something wrong, we were disciplined and that was the end of it.  Mom had one thing she called her own.  That was her flower beds.  That was her quiet time.  The only time we were shut out of her life.  She would plant, preen, weed, and admire her off limits gardening.  As a result, none of us girls grow flowers or plants or anything of any kind.  Occasionally, I have tried it, but somewhere in me it's off limits and I can't enjoy it.  If she had known, she would have took us by the hand and taught us what she knew, but it was herself pretty preservation and I understand that.  Mom was pretty anti-social.  She was who she was and wasn't going to dress up, dress down, or do anything for other people's approval. She didn't visit with the neighbors.  She knew them all but was not interested in anything more than that.  Mom went barefoot all the time.  She was going in and out of the house hanging out clothes, and three of the neighbors were sitting in lawn chairs watching her.  One of them hollered and said "Hey Thole, we're going to take up a collection and buy you a pair of shoes"  Mom said "Don't bother, come on over and I'll give you all a pair of the damned things".”
Mom always said it like it was.  She never lied to us or anyone else.  She was sweet, the model wife; she never did anything without dad's approval, on the other hand, neither did dad.  She deeply believed in God and taught us right from wrong usually in moral ways.  Have absolutely no bad memories of my mother.  She was an angel not long for this earth.  We just didn't know.” ~ contributed by Barbara Thole Taylor

I am right there Barbara, I never had a negative moment in the presence of my Aunt Lillie, nor did I ever hear a negative word spoken of her from any of my Aunts, Uncles, or Grandmother. She was and is held in high esteem by those who remember her.
Posted by FranE at 11:33 PM