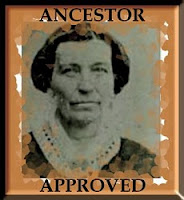 I have procrastinated all day thinking on this award.  I do thank Joan at Roots 'n' Leaves   ,  Carol from Reflections From the Fence , Lindalee at Flipside  , and Karen at Ancestor Soup  for this award.  I don't know why I would deserve it, but I will honor their gift. Now I am trying to hurry (sure, it just took me a day to get this done) so I can go visit the other blogs they awarded it too.

As a recipient of this award, I am to list 10 things I have learned about my ancestors that have surprised, humbled or enlightened me and then pass the award on to 10 other genealogy bloggers who I feel are doing their ancestors proud.
I can not imagine doing this quickly.  I include my husband's genealogy with mine.  As we became one when wed, our families became one in my mind.

1. I was surprised to find a son of John G Porter that had never been known before.  Extensive research had   been done on this family, but they apparently had never read the actual probate records.
2.  I am frequently humbled by the story of my grandmother Matilda Roberts Whitson who persevered  raising 6 of 13 children and 2 grandchildren after her husband died of cancer and the creditors took everything.  It helps me keep things in perspective.
3.  Enlightened by my study of the Mason's Apron which belonged to Thomas Thorn and the amount of interest of others that was generated by the story.
4. Surprised by a newpaper article I found at Genealogybank.com that points to a possible change in the history of my great grandfather and who his father was.  I am still exploring this.
5. Humbled by the history of the times my ancestors live through.  As my own children have moved many states away from our home, I have developed empathy with the mothers that must have sobbed at night knowing they probably would never see their children again that had gone west.
6. Surprised when I found the true story of my grandfather Charles Gildon moving west from Georgia.  My father had some of the truth, but it was steeped in lore that was not true.
7.  Enlightened when I read the book "Of Plymouth Plantation" by my ancestor Governor William Bradford.
It was wonderful to hear the story of the pilgrims in the words of one who had lived it.
8.  Surprised and elated when after 3 years of searching for the Hero's great grandfather, I looked on the opposite side of the index page and found him out of alphabetical order.  Silly me.
9. Enlightened by new methods of research.  DNA nailed an ancestor James Alexander Vance that many were sure about, but much had been circumstantial.
10. Enlightened, when I discovered in Old Wyoming Newspapers the true nature of my great grandfather Richard Whitson's death.  Family had always said he died in a gunfight...Highly romantic, he died of pneumonia.

Hmm looking at my list I would say not much has surprised me, but I have been greatly enlightened by study and certainly new facts can surprise one.  LOL

Now the 10 bloggers to pass the award on to and then the fun part of going to their blog and letting them know.  They are not in any particular order and you can visit them by clicking on their Title.

1. Lisa at The Faces of My Family
2. Travis at TJLGenes:Preserving Our Family History
3. Robin at Where I Come From
4. Jo at Those Who Went Before
5. Terri at The Next Chapter-Page 2010
6. Heather at Nutfield Genealogy
7. Barbara at Life From the Roots
8. Laura at It's All Relative
9. Kathy at I Will Remember
10. Donlynn at Homestead Origins
Posted by FranE at 8:18 PM