Sentimental Sunday The Hero and His Wonderful Car 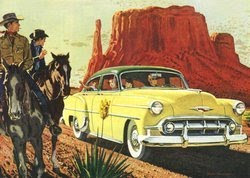 When the Hero came home from Army Boot Camp to resume his life as a reservist.  He faced many challenges.  The job he had had did not work for him.  His wife had divorced him and took all material items of value including his car.  His dad asked him to come to work for him.  In order to do so, he had to obtain a car.  He asked around his friends if anyone had a cheap car for sale.  'Sure thing', they said.  Old so in so went back home to Saudi Arabia and left his car behind to sale, good deal only 50 bucks.  The hero thought "Great! I will have transportation and not be in debt.!" Needless to say, he purchased the car.  It was not in great shape, no duh, but it did run.  Now he should have known something was a miss when he had to track down the owner out of states to obtain a title.  This is not the car obviously, I borrowed the picture from 1953 Chevy Classic site to illustrate the car.
We went on some dates in it, but the funniest story was of him leading a company truck to a job site in it.
Remember, this is 1969 in Houston, Texas.  They were finishing the loop around the city.  The incident occured on South Loop 610.  This picture was taken at the same area the incident occurred. The Hero was in lead trying to stay with the sight of the truck driver.  He was moving right along with the traffic, when a car whipped in front of him and slammed on their breaks.  Easy enough, right.  Not.  He slammed on his breaks and it started his car into a spin.  He remembered going around at least twice before stopping.  When he came to a halt, he was headed in the wrong direction.  All the cars behind him had stopped.  Every door on his car was wide open, the trunk and the hood up.  I can imagine his bewildered look as he unsteadily got out of the car to assess the damage. When he saw what had happened, he started laughing and went about closing doors, the trunk and hood. Got back in the car, turned around, and continued their trip.
Later, the truck driver, an older man, sat and laughed as he told everyone at the shop about the crazy driver the Hero was and his miracle car.  The Hero just shook his head and said. "What an experience", then he grinned. 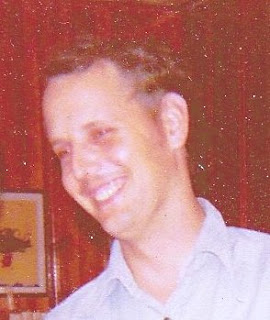 Email ThisBlogThis!Share to TwitterShare to FacebookShare to Pinterest
Labels: Sentimental Sunday, The Hero and His Wonderful Car