Sentimental Sunday The Hero and a Forward Girl

I have to tell a story on myself this time.
It was a favorite story of the Hero's about how he started dating me. 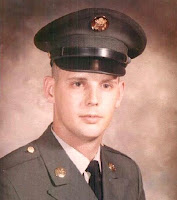 To give you some background, I had met him many months before we dated while I was working with his friend at the Methodist Hospital cafeteria. He had come back home to find out why his wife had divorced him while he was in basic training. He was a thin, haunted looking young man with expressive eyes.

I had thought "he's handsome, but I don't think I could date a divorced man." He said "I thought she was a special girl. Her eyes caught mine." I saw him a couple of other times when we were out with mutual friends.  Then there was a picnic given by the Arab Students Association.  I was asked by my co worker who was a member, and the Hero had been invited because he had been an adviser to the Foreign Students Organization in college (that's whole story in its self.)
Back to the picnic.  My best friend was at the picnic.  We did not drink so when our dates began to be tipsy, we wandered off to visit.  As we sat talking, the Hero came up and started a conversation with us.  I was thinking, I think I could date him.  As it turned out he said, "Do you all know of any girls that are available to date." (Do you think I was crazy? He did. ;)  )  I quickly spoke up and said " I am."  What was he supposed to say.  He got my number and called me that evening.  We talked for hours.  Over the following year, we broke up once and made up and went back together. That story I have already told. Click here for that story
Years later he confessed that he had been hinting for me to introduce my room mate to him, but decided he had gotten the better deal.

Here I am at that time period.
He would laugh telling the story, and wink at me saying "she was a hussy.''
And that my grandchildren is how we began to date and where we met.
Posted by FranE at 2:15 AM

Email ThisBlogThis!Share to TwitterShare to FacebookShare to Pinterest
Labels: Sentimental Sunday, The Hero and a Forward Girl