Sentimental Sunday The Hero and His Imaginary Friend

This story is taken from the Hero's personal history he started a year before he died.
It is in his own words.  I added the pictures his mother gave to me.

"I had an imaginary friend too. I suppose I had first dreamed of him. Whenever it was necessary for me to play alone, which was not very often, I would play with him. He was very real to me. He had a horse. I guess I wanted a horse. My friend was me; but with, all the options I wished I had. I had only seen a horse on TV or at the movies. However, a photographer had come by the house taking pictures of children in cowboy attire on the back of a pony. 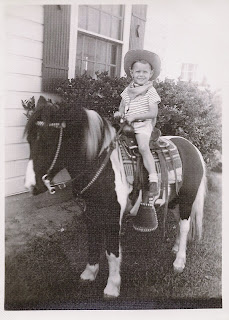 I suppose the pony caught my imagination. The main thing my friend had, that I desired, was a horse that would take him anywhere he wanted to go. So he would tell me about his exciting life. Like how he rode the horse to the Shamrock Hilton Hotel. 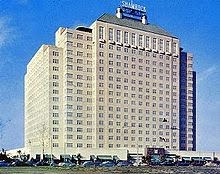 When asked what he did with the horse, I was told that he tied it up in the back by the pool cabanas. I reported the incident to my family and they got a chuckle of it."

He had a bond with the Shamrock Hotel.  Maybe it was because it was constructed when he was born and was considered a great building of its time.  It really bothered him when it was demolished in 1987.
Posted by FranE at 1:32 AM

Email ThisBlogThis!Share to TwitterShare to FacebookShare to Pinterest
Labels: Sentimental Sunday, Shamrock Hotel, The Hero and his imaginary friend