Olive Tree Genealogy gave the prompt on the 7th to talk about our grandfathers.  I border more on lamenting that I never knew them.  Of course, my father lamented his father died while he was in Europe during WWII and my mother lamented her father died when she was two and thus she grew up without a father.
I will start with my paternal line. 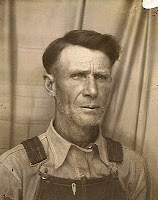 My Grandfather William Richard Langley was born in Missouri in 1879.  He was a farmer and blacksmith and part time evangelist leaning towards the Church of Christ, but never committing to an organized church.  He apparently had a sense of humor and earned the complete adoring love of all his children.  I have never heard a disparaging word spoken of him.  I wish I had known him, he looked like so much fun to know, and I believe my grandmother might have seen life with more humor had he lived. 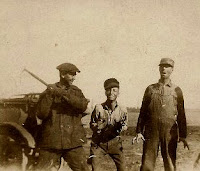 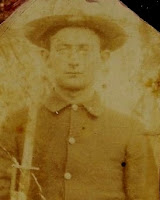 My maternal grandfather was much more adventurous.  I will later write in detail about different aspects of his life.  As a young man, he was a soldier, a cowboy, a straw broom salesman, an entrepreneur who brought the first generator to a small town.  He served at home during WWI.  Soon after the war, he was diagnosed with cancer of the bone, he lost his left lower leg, but the cancer continued and he died young at 51 years of age.
Posted by FranE at 11:57 PM