St Patrick's Day has not been a religious holiday for my family.  Rather, I would say it has been one of fun.  "The Wearing of the Green" had a totally mischievous meaning  for our household.
As I grew up, it was a challenge be in green and not be greeted with a pinch on the morning of March 17th.  I have searched the web and can not find a true symbol of why one is pinched.  The only reason I found given is that it started in America as a manner of teasing others.  [Some how leprechauns were incorporated into this in the 1700's.  I wonder about the date given because I just don't think in the 1700's there was a lot of worry about wearing green or finding a shamrock in March in the thirteen colonies.]  When I married, the tradition continued.  Sometimes with consequences when I got over zealous and took advantage of the Hero.  Has anyone heard of being tickled to death after being chased around the house.  Grave consequences. 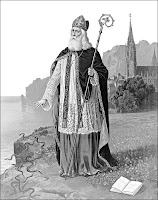 I did develop a great appreciation for St Patrick as I studied about him while growing up.  I really do not like snakes.  I have a phobia of snakes.  To think that there was even a possibility that he actually drove the snakes from Ireland makes me love him.  The National Geographic wants to say that it is just because of  Ireland being an island.  I don't know, there are snakes on many islands in the world.  I think St Patrick did a miracle for the island.  Just my thought.

I know that St Patrick himself did not start out as native born of Ireland, but he developed a deep love of the people and island.  I have empathy with this. I have a little Irish heritage through the Magill Family, but I have a huge love of the culture, the people and their ability to persevere in the face of adversity and to have fun with legends and myths.  I appreciate the love that those who immigrated to America kept for their heritage, although they did appear to be clannish in their thoughts.

We continue to have fun with St Patrick's day in our family and I have made a collage of the different clothing through the years we have worn to commemorate the holiday. 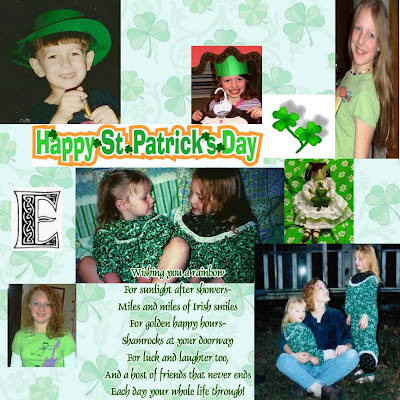 Email ThisBlogThis!Share to TwitterShare to FacebookShare to Pinterest
Labels: 18th edition of the Carnival of Irish Heritage and Culture, St Patrick's Day