I think by now you are beginning to understand the Hero was an understanding tolerant man.  He had to be married to me.  ; ) 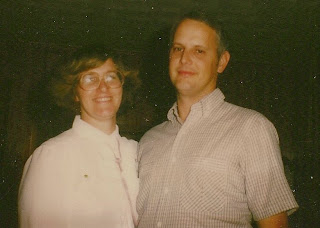 When I say Hollywood Stars, I am figuratively speaking.  My father liked to box, when he was in the service he was on the army boxing team.  I learned to box, yes a girl, (I was an only child) from my dad.  As a result, one of the fun things I would do with the Hero when we first got married was challenge him to spar with me.  He would always get a giggle out of my dancing around him to get him to box.
This one time, we were in the front yard and I was dancing and throwing fun punches at him, when all of a sudden as he was looking at my feet, my fist hit him directly in the nose.  Oh MY! He saw Hollywood Stars for a minute.  I was laughing (partly from nervousness, I didn't want to hurt him and partly from the look on his face), when I realized what I had done.  Then when he "came to", he was laughing, but said I was going to get it.  Imagine the neighbors' thoughts as they saw the young couple running up and down the block, laughing and threatening each other.  When he finally caught me, we were laughing so hard all we could do was sit and look at each other.
He decided it was a new story he had to tell. Thus it became, 'my wife was taught to box by her father, she has the funniest foot work........'
He knew how to make the most out of any incident.  Life was good.
Posted by FranE at 12:20 AM

Email ThisBlogThis!Share to TwitterShare to FacebookShare to Pinterest
Labels: Boxing, Making the best of things., Playing together