Sentimental Sunday The Hero and Cutting a Christmas Tree 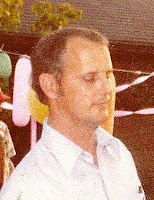 The First Christmas Tree the Hero and I had was a Texas Pine Tree.  The story I tell you is not logical, but true.  I was new to Texas, the Hero was trying to be kind (we were dating).  I really wanted a cedar tree like my dad always cut in Oklahoma for Christmas.  Sigh. Cedars are rarely found in Coastal Texas unless they are in someones yard.  The Hero was not daunted, nor was Texas to be out done by Oklahoma. ; )

He took me for a drive to where he KNEW there was some small pine trees we could use.  Well, there weren't any small trees on his dad's property,  SO he spotted a medium tree near the street.  Yep, he climbed the tree, and chopped the tree down with his machete uh maybe bayonet from his rifle.  Whatever, it was not a saw.  I stood on the street watching and wondering if we were going to be arrested.  Luckily, it was a isolated road back in what is now known as Oak Ridge Forest subdivision. It took him quite a few minutes to cut the top (yes, I said top) off of the tree.  When he got down to the ground, he stood it up and it was about 5 ft tall, just perfect for my apartment.  He opened the trunk, it was not big enough.  He pushed the backseat forward and down (it was the old 1953 Chevy I wrote about before.) He tied the trunk down to hold it in place and we drove 45 miles back to my apartment to set it up.  (Great big grin on my face right now)  As we took it inside, the size of the tree, which had seemed reasonable earlier, was overwhelmingly large. In height it was okay, but in width...a wee bit big; as in, if it wasn't trimmed, you could not see the couch.  After some adjustment, it turned out fine.
For years we would look back at that trip and giggle at the thought of the Hero chopping, maybe hacking,  the tree top of a pine tree.  Now grandchildren, you see your granddadE was an awesome man who went to lengths to make me happy.
Posted by FranE at 1:03 AM

Email ThisBlogThis!Share to TwitterShare to FacebookShare to Pinterest
Labels: Sentifmental Sunday, The Hero and Cutting a Christmas Tree