The Hero loved Christmas, and he loved little children.  One of my favorite stories around the Hero is the fun he had as he grew older and his hair turned silvery white.  He always wanted to be Santa at a Christmas party, but they always chose an older man.
He would laugh and say I was named after St Nicholas, so I should be able to play him at the party,alas, that was not to be his roll.  Instead, his role was much more fun and out in the community.
The Hero let his beard grow out and wore red clothes during the December months, especially after one encounter he had. 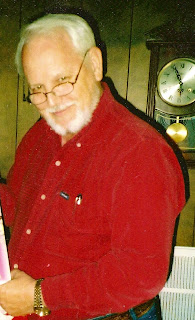 We were at Fazoli's restaurant having lunch. The Hero had on his red shirt and red parka (did I mention he was extremely cold natured...50 degrees and out came the parka...lol).  He had gone up to the salad condiment area and a little girl about 5 years old walked up to him and started to explain what the condiments were and how to use them.  He was amused and smiled while she talked, then she pointed at her family's table and explained to him, that was her little brother and he was 1.  She went on to tell him that she had been really good. The light went on.  He realized that she thought he was Santa from the North Pole.  He told her thank you for the information and explained she needed to go back to her mommy.
He then came and sat down with a big smile telling me all about what had transpired.  He was delighted.  As the mother and children got up to leave, the little girl looked over at our table and waved.  He couldn't help himself.  He winked.  She smiled so big and skipped out the door.  She had a story to tell her mom.
To prove the theory that the Hero looked like Santa, I pulled the Hero's picture up to show our grandson who had spent 2 years with his grandpa and knew him well. The picture did throw him...after looking and considering, he stammered...is that Santa?  There you have it. What do you think?
The Hero was St Nicholas personified.  I won't tell you at this time all the wonderful acts of kindness he performed through the years suffice it to say, he loved others.
Posted by FranE at 1:00 AM